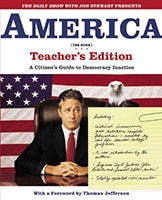 Review this list of popular examples to help you get a better understanding of the political nonfiction genre.

2. All the President’s Men by Carl Bernstein

3. America (The Book): A Citizen’s Guide to Democracy Inaction by Jon Stewart

5. Bush at War by Bob Woodward

9. Fear and Loathing on the Campaign Trail ’72 by Hunter S. Thompson

10. Feminism in Our Time: The Essential Writings, World War II to the Present by Miriam Schneir

11. Guns, Germs, and Steel: The Fates of Human Societies by Jared Diamond

12. I am America by Stephen Colbert

13. I Am Malala: The Girl Who Stood Up for Education and Was Shot by the Taliban by Malala Yousafzai

17. The Age of McCarthyism: A Brief History with Documents by Ellen Schrecker

18. The Constitution of the United States of America by James Madison

19. The Diary of a Young Girl by Anne Frank

20. The Mother Tongue: English and How It Got That Way by Bill Bryson

22. The Tarnished Shooter by Charles James

This website uses cookies to improve your experience while you navigate through the website. Out of these, the cookies that are categorized as necessary are stored on your browser as they are essential for the working of basic functionalities of the website. We also use third-party cookies that help us analyze and understand how you use this website. These cookies will be stored in your browser only with your consent. You also have the option to opt-out of these cookies. But opting out of some of these cookies may affect your browsing experience.
Necessary Always Enabled
Necessary cookies are absolutely essential for the website to function properly. This category only includes cookies that ensures basic functionalities and security features of the website. These cookies do not store any personal information.
Non-necessary
Any cookies that may not be particularly necessary for the website to function and is used specifically to collect user personal data via analytics, ads, other embedded contents are termed as non-necessary cookies. It is mandatory to procure user consent prior to running these cookies on your website.
SAVE & ACCEPT